A Columban Centennial on 10 October 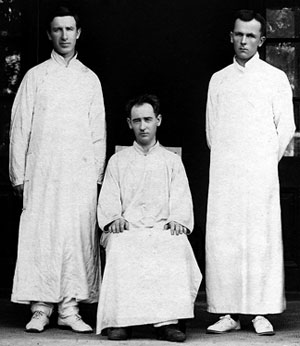 One hundred years ago on 10 October the Bishops of Ireland gave their blessing to a new venture known as the Maynooth Mission to China. On 29 June 1918 this venture became the Society of St Columban, in the Diocese of Galway, Ireland. The Missionary Society of St Columban, as it is now known, is already preparing to celebrate its Centennial in 2018.

As your editor sees it, 29 June 1918 was the date when the Society was ‘baptized’. It had been ‘conceived’ in China between 1912 and 1916 when Fr Edward Galvin, ordained in 1909, and three or four other Irish diocesan priests working there saw the need for a mission of the Irish Church to China. It was ‘born’ on 10 October 1916 when the Irish bishops, approached by Fr Galvin and Fr John Blowick, ordained in 1913 and already a young professor at St Patrick’s, Maynooth, the national seminary for Ireland, gave their assent to the ‘Maynooth Mission to China’.

In Easter Week 1916 an uprising against British rule in Ireland took place, mainly in Dublin. The country was still part of the United Kingdom of Great Britain and Ireland and Irish regiments of the British Army were fighting in the Great War (1914-18), mainly in Belgium and France. Nearly 30,000 of them died during that conflict. There was widespread extreme poverty in Ireland, particularly in the cities. 1916 did not seem a good time to start such a foolhardy venture as sending Irish priests to preach the Gospel in China, a country very few Irish people knew anything about.

But the Irish bishops said ‘Yes’ to the Maynooth Mission to China. And the people supported it, as they have continued to do down the years. Fr Blowick once said that the pennies of the poor were more important than the pounds of the rich. But he welcomed both.

The vision of a mission of the Irish Church to China broadened to a more international one. After the Society of St Columban was set up – all the founding members were Irish diocesan priests and seminarians – priests were sent to the USA and Australia to establish roots there, especially among the large Irish diaspora. Irish-American Archbishop Jeremiah Harty of Omaha, Nebraska, USA, invited the Society to set up shop there. He had been Archbishop of Manila (1903 – 1916), the first non-Spaniard to hold that position.

The first group of Columban priests went to China in 1920.

In response to an urgent appeal by Archbishop Harty’s successor in Manila, Irishman Michael O’Doherty, the Columbans took over Malate Parish in 1929. By the 1970s around 260 Columbans were working in Luzon, Negros and Mindanao. All the parishes they staffed and opened, except Malate, are now served by diocesan priests and the number of Columban priests in the Philippines is around 30.

Over the years the Columbans have taken on missions in Korea, Burma (now Myanmar), Japan, Chile, Peru, Fiji, Pakistan and Taiwan. They have had missions also in Argentina, Belize, Brazil, Guatemala and Jamaica.

Most of the younger Columban priests are from countries the older men had gone to from the West.  Fr Leo Distor, the first Filipino Columban parish priest of Malate, is a symbol of the changing face of the Society. After serving in Korea he spent many years in Chicago and in Quezon City in the formation of future Columban priests from Asia, the Pacific and South America.

This year there are Columban seminarians from China, Fiji, Myanmar, the Philippines and Tonga in the formation house in Cubao, Quezon City and on the two-year First Mission Assignment (FMA) overseas. The Filipinos include Louie Ybañez of Holy Rosary Parish, Agusan, Cagayan de Oro City, a former Columban parish, recently returned from his FMA in Pakistan, and Erl Dylan Tabaco from the same parish as Louie and Emmanuel Trocino from Pulupandan, Negros Occidental, back from FMA in Peru.

The young Fr Edward Galvin (1882-1956), later Bishop of Nancheng, China, and the young Fr John Blowick (1888-1972), not to mention the Irish bishops in 1916, could not have foreseen how the Maynooth Mission to China would evolve from being a purely Irish venture into the international Society it is today with Priest Associates from dioceses in Ireland, Korea, Myanmar and the Solomon Islands, and Lay Missionaries from Chile, Fiji, Ireland, Korea, Philippines and Tonga currently involved in its mission.

Thank God for the birth of the Maynooth Mission to China on 10 October 1916.

‹ Peace By Peace up The God of Surprises: Pilar and CLM Beginnings ›