This story, datelined Karachi, Pakistan, first appeared in Sunday Examiner, the English-language weekly of the Diocese of Hong Kong, on 30 August this year.

Ping-pong diplomacy played a big role in thawing the ice during the communication freeze between the United States of America and the People’s Republic of China back in 1971, but today, the governor of the Sindh in Pakistan, Ishratul Ebad Khan, is taking cricket beyond the frigid zone to cool sometimes overheated interfaith and inter-cultural relations by building healthy friendships through sport.

A keen cricketer himself and avid fan of the sport, Ishratul Ebad has thrown his support behind the upcoming game between a Vatican XI and the Archbishop of Canterbury’s XI to be played at ‘the St Peter’s Basilica’ of cricket, Lords Cricket Ground, in England, in September.

However, the governor has bigger plans in the making and is looking to expand the concept by inviting the two teams to come to Pakistan in 2015 for a Tri-Series Tournament that will include the Governor of the Sindh’s XI, to create friendship and dialogue across religious and cultural differences.

At the Governor’s Residence in Karachi on July 8, Ishratul Ebad gave concrete support to the St. Peter’s Cricket Club, popularly dubbed the Vatican XI, when he presented a check for US$2,000 (Php87,000) and six test-quality (international standard), made-in-Pakistan cricket bats to the team.

A member of the committee of the St Peter’s Cricket Club, Fr Robert McCulloch, and a Pakistani seminarian who has been selected as the team’s wicket-keeper, Aamir Bhatti, accepted the cheque and bats from Ishratul Ebad (above).

Coming from a country where few things can capture the attention and imagination of the population, or unite in the manner of the national cricket team, the Pakistani governor added that he intends to arrange for a current or past test (international) player from Pakistan to travel with the Vatican XI as a coach during its tour of England.

Fr McCulloch who spent over 34 years as a missionary in Pakistan after seven years in Mindanao, Philippines, and is currently the Procurator General of the Columbans and based in Rome, passed on the thanks of Monsignor Melchor Sanchez de Toca, the secretary of the Pontifical Council for Culture, which is sponsoring the team.

The Vatican will also play a game against a Royal Household XI at Windsor Castle and some other teams while on tour in England.

All proceeds from the games will be donated to the Global Freedom Network, a joint Anglican-Catholic-Muslim anti-trafficking charity. 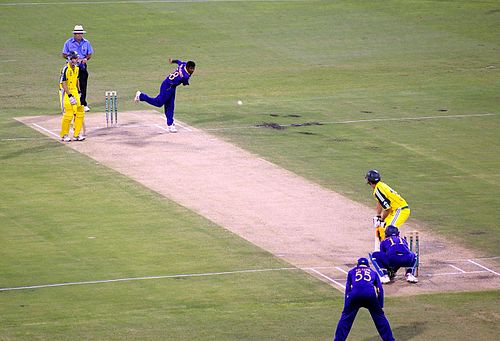 Both the Vatican XI and the Archbishop of Canterbury’s XI are made up of priests and seminarians. The Vatican side chose its players from the residents in various theological colleges around Rome and it includes eight Indians, two Sri Lankans, one Pakistani, one Englishman and one Irishman.

The committee is made up of Australian, English, Irish, Sri Lankan and Spanish representatives, leading Monsignor de Toca to comment that the team has a truly international face, especially with the addition of a Pakistani coach.

Monsignor de Toca said in a letter to the governor of the Sindh, ‘The team (Vatican XI) brings together the best players from many international seminaries in Rome and includes one Pakistani representative from Karachi.’

He added, ‘Inundated as we have been with requests for television documentaries and interviews from major international newspapers, it has been a joy to watch, as the initiative has peacefully taken up its proper, universal character and articulated its international face.’

He added that the club has become a true expression in Rome of the Asian cultural values that have been engendered into the game of cricket, with its gentlemanly way of life, fierce competition, intricate skill and great tradition of hospitality.

One of the big pushes behind the cricket team comes from the Australian ambassador to the Vatican, John McCarthy. He told Vatican Radio in January, ‘Anything that properly builds interfaith and intercultural relations, understanding and exchange, the Commonwealth of Australia sees as an important part of our diplomacy.’

The plan has also received widespread support from bishops in the cricketing world, many of whom are known for only being available to members of their flock who are at the cricket when international test matches are being played in their dioceses.

Ishratul Ebad said that he is delighted that a Pakistani has been included in the Vatican XI and that Pakistan will continue to provide support to help the Vatican develop its cricket team.

Father McCulloch described Ishratul Ebad as a leading advocate and supporter of interfaith harmony and dialogue in Pakistan, pointing out that the governor said that he is delighted to be of assistance and to offer ‘a gift for our friends in the Vatican as a token of friendship.’

Standing in the shadow of the a statue depicting the swearing in of the first governor-general of Pakistan, Quaid-e-Azam Muhammad Ali Jinah, who articulated a dream of a free Pakistan in his inaugural speech to the new nation in 1947, Father McCulloch, Bhatti and Ishratul Ebad resonated with his words, ‘You are free; you are free to go to your temples, you are free to go to your mosques or to any other place of worship in this state of Pakistan.’

If Ishratul Ebad can marry his cricket dream with Jinnah’s vision, maybe the only thing that will remain to be said is, “How’s that!!!”*

*In cricket an umpire can only give a batsman out if the fielding team appeals to him to make a decision. Traditionally this is expressed in the words, ‘How’s that?’ In the excitement of the moment this mostly becomes an impassioned scream, often accompanied by extreme gestures of supplication, ending up in a slur that sounds something like Owzzzat?

The phrase has come to epitomize the game.

A taste of cricket – with Irish music in the background