Lili is a Columban lay missionary from Tonga who arrived in the Philippines in December 2015.

I am currently assigned in Cagayan de Oro, to one of the communities named Antipolo, in a sub-parish called Barra. My engagement in the ministry involves accompanying and visiting families, and teaching catechism to the children among others. I am also involved in the Women’s Ministry of the Archdiocese.

I would like to share one of my experiences about a woman I met in Antipolo named Analie Echnique. Beautiful in and out, funny, friendly, strong, patient, a responsible mother to her children, a loyal wife, are some of the many qualities I have witnessed in Analie. She grew up in Bukidnon (south of Cagayan de Oro) and is the eldest of twelve children. She often cracked jokes in an attempt to make me laugh. I appreciated her interest in listening to my stories on how I became a missionary. I often heard her say, “Sayang, naa nako bana ug mga bata. Pwede unta mag missionary lang ko (It’s a pity, I already have a husband and children. I would have loved to be a missionary).”

Her parting words to me every time I finished my visitations were, “Balikbalik ha (Please come again).” During these visits, she helped me practice my Cebuano language. Sometimes, she appeared to be busy with household chores, so I would often try to help her out. Over the course of time, I realized that a strong friendship developed between us. I also noticed that her attendance in our community Mass was becoming a regular habit too. 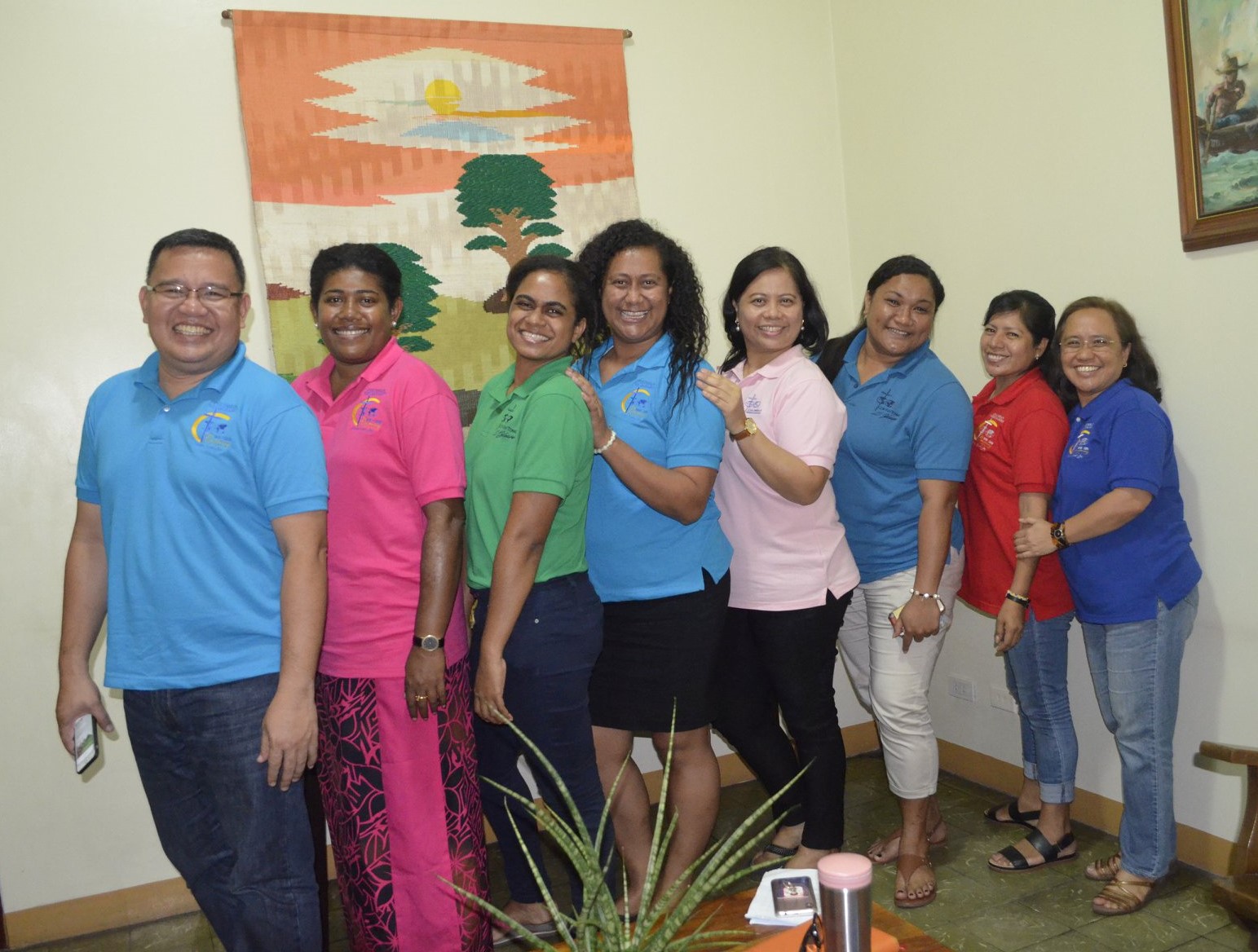 Columban lay missionaries in the Philippines, 2018

One day, I accompanied Analie to the hospital for her check-up. She had undergone some tests which revealed that she had Hansen’s disease (Leprosy). I continued to accompany her to the hospital during her follow-up visits and helped her family understand about her illness, especially about the prognosis and the impact of her diagnosis to the community. To get sick in the Philippines would cost someone a fortune, but Analie was so happy to know that free medicines could be requested at the Health Center, so she started taking medications for free.

I was in Manila for almost two weeks and upon my return to Cagayan de Oro, I received a telephone call from Analie’s sister. Analie was admitted to the hospital. I rushed to check on her and when I arrived there, I saw her sister waiting for me and she ushered me to the Intensive Care Unit (ICU). When I was about to go in, the doctor instructed me to wear a mask. When I entered the ICU, I saw the reality of what full-blown Hansen’s disease looked like. Her skin was swollen and covered with lesions. I was shocked, but managed to approach her bed. Analie greeted me with a weak smile and a sigh “Sakit kayo, Lily, kapoy ko (It’s extremely painful Lily, I am tired).” I could not utter a word – I just stood beside her, perplexed, just to be with her. Hearing her moan and seeing her attempts to move even a little was indicative of the severe pain she was experiencing. The doctor said that it was too late for Analie to take the medications.

I decided to go home that night to rest. When I was about to leave, Analie said to me, “Balikbalik ha (Please come back).” During her time at the hospital she would often share with me, “Kapoy ko, Lily (I am tired, Lily).” All I remember telling her was that God knows her strength, and would give her enough to bear her suffering. Seeing her in pain, I asked her permission to invite a priest to anoint her so she could receive Holy Communion, which she agreed to.

She confided in me that she had already given her children to be adopted by her parents and her 3-month old baby to her husband. I was confused, even disturbed, and asked her why she did that. She said to me, “Dili na nako kaya karon (I can’t take care of them now).” But still I didn’t understand what she meant…

Analie was discharged from the hospital after two weeks. One early morning, I was preparing to visit her as I would be busy in the afternoon. Then my phone rang. It was a call from Analie’s neighbor to inform me that Analie was already dead. At that moment, my world stopped revolving, my hands began to shake, and tears rolled down my cheeks, unable to believe what I had just heard.

I was a stranger and Analie made me feel welcomed. We became very good friends. That was my saddest day here in my ministry – the day I lost a very good friend. I arrived few minutes before they took Analie’s body to the mortuary. I was told by her husband that she had died in her sleep. Her husband allowed me to have a glimpse of her lifeless body. I saw her hands clasped on her chest, her face looked so peaceful. Right at that moment, I felt a sense of comfort, knowing that she really did prepare herself because she knew her time to return to her Maker would come soon.

I have grieved over the passing of a stranger who became a good friend and family to me. This passage has comforted me: “As for me, my life has already been poured out as an offering to God. The time of my death is near. I have fought the good race, and I have remained faithful. And now the prize awaits me, the crown of the righteousness, which the Lord, the righteous Judge, will give me on the day of his return. And the prize is not just for me but for all who eagerly look forward to his appearing” (2 Timothy 4:6-8). I believe that Analie is an angel now. She taught me how to be patient, to be courageous and to be ready when God calls me to rest in His arms. I pray, “Eternal rest, grant unto her, O Lord, and let your perpetual light shine upon her. May the soul of the faithful departed through the mercy of God rest in Peace… Amen.”

Author:
Liliani Ma’afu
‹ A Shepherd with the Smell of his Sheep up From the Editor ›