‘He was . . . a perfect gentleman’. These words from the homily of Bishop Marlo M.

Peralta of Alaminos at a Memorial Mass for the late Fr Joseph Gallagher in Labrador, Pangasinan, echoed what everyone said about Father Joe at his funeral in Ireland, which your editor attended.

Fr Joseph Gallagher died in Ireland on 2 August at the age of 90. He had retired to Ireland in 2006, having spent 57 years in the Philippines, 22 of them in San Isidro Parish, Labrador, formerly part of the Archdiocese of Lingayen-Dagupan but since 1985 part of the Diocese of Alaminos, Pangasinan.

One of Father Joe’s greatest services to the parish was to establish a parish school in 1954, St Columban's School, which is still flourishing. It was originally a high school, but for some years now it has had a large elementary department.

Because he was so dearly loved and remembered in Labrador the community there organized a Memorial Mass for him, celebrated in the parish church on Sunday, 25 August. The idea of having a Mass was first floated by the very active Alumni Association of the school under the presidency of Dra Corazon Macaraeg. But the whole parish wanted to be involved, especially the Parents/Teachers Association, the school, and various parish organizations. It was very obviously a joyful community celebration.

The Columban Fathers and the Columban Sisters were invited to attend. Fr Dan O'Malley, Acting Regional Director at the time, arranged for a group to travel in the van of the Columban Lay Missionaries, with John Din, the coordinator in the Philippines, driving. Four other lay missionaries went along, Arlenne Villahermosa, Nani Mo'unga, Gertrudes Samson and Rosalia Basada. Nani had recently returned from a visit to her homeland, Tonga, while Gertrudes and Rosalia have since returned to Britain for a second term there. Regional Archivist Fr Pat Baker also joined the group.

On arrival in Labrador we were given a very warm welcome by the Sisters of St Joseph of Cluny who have been running St Columban's School since 1996. The Columban Sisters, who had been in charge of the school since 1960, left in 1995. Sr Priscilla (Pricy) George SJC is the present Directress of the school. Originally from India, she has been in the Philippines for eight years. She and her Community and staff provided the Columban visitors with a very substantial breakfast and filled us in on the details of the ceremony about to take place. 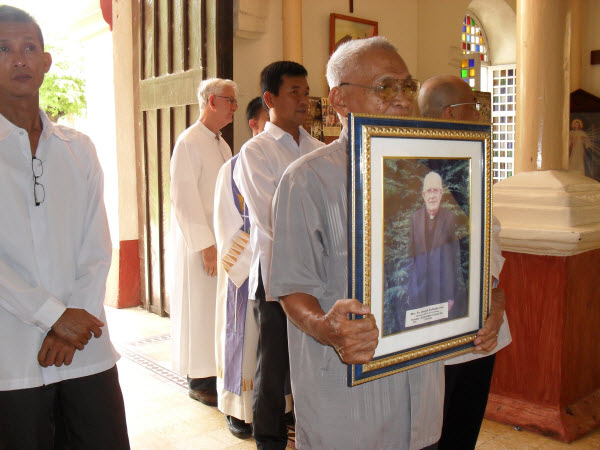 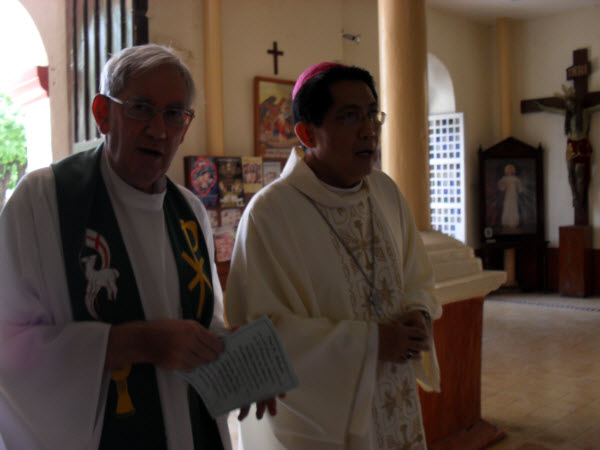 Bishop Marlo M. Peralta of Alaminos graciously accepted the invitation to be the Main Celebrant for the 10:30 am Mass. Concelebrating with him were the present Parish Priest, Fr Mariolito S. Ferrer, and Fr Isidro R. Palina who had come all the way from Sts Peter and Paul Parish, Calasiao, Archdiocese of Lingayen-Dagupan, because Father Joe had given him a lot of support and encouragement while he was a seminarian. Fathers Dan and Pat also concelebrated.

It was obvious that a lot of preparation had been made for the Mass. There was a big tarpaulin in front of the altar with a photo of Father Joe and some details of his life. Mr Primitivo Rico, the first teacher hired by Father Joe in 1954, carried a large, framed photo of him in the Entrance Procession. The church was full. The Mass was a joyful Mass for the Dead, even though it was a Sunday, a celebration of Father Joe's long life and a prayer that he now enjoy eternal rest. 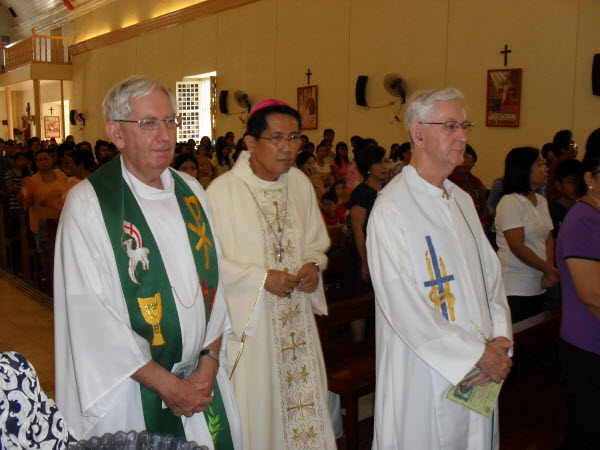 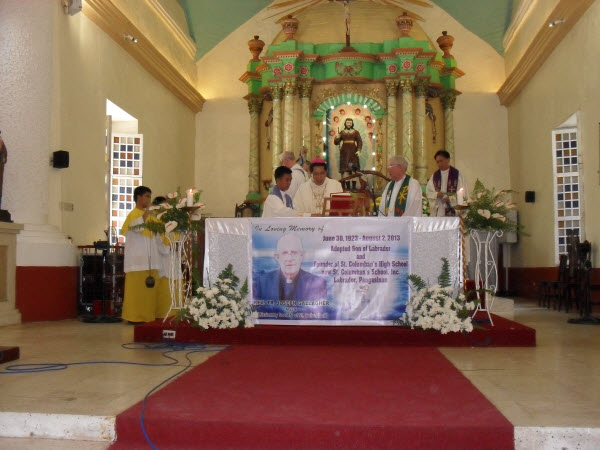 In his homily, Bishop Peralta explained that he was not yet Bishop of Alaminos when Father Joe left Labrador, but that he had met him once. He had made a special trip from Urdaneta Diocese, where he was the Vicar General, to meet him. He had heard what a wonderful priest he was. Father Joe made a lasting impression on him with his warm welcome, his openness, his kindness. The Bishop went on to elaborate on Father Joe's reputation for kindness and generosity towards all whom he met. He was a holy man who never seemed to get angry, a perfect gentleman, able to relate warmly to everyone in the parish, an inspiration to the Bishop and to many others.

Before the final blessing Mrs Lilia Ocampo gave a eulogy about Father Joe on behalf of the Alumni Association. She was a member of the very first graduating class of St Columban's School in 1958. Her sharing made it very clear what an impression Father Joe had made on the students in those early days, what an inspiration he was. The values that he instilled in the students and staff are still a feature of the school. The fact that the Alumni Association is still so active is a testimony of this. 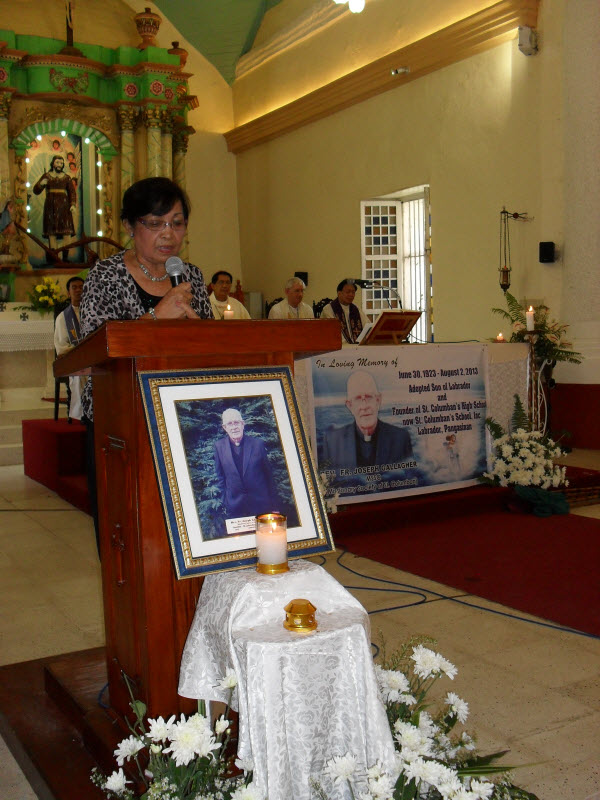 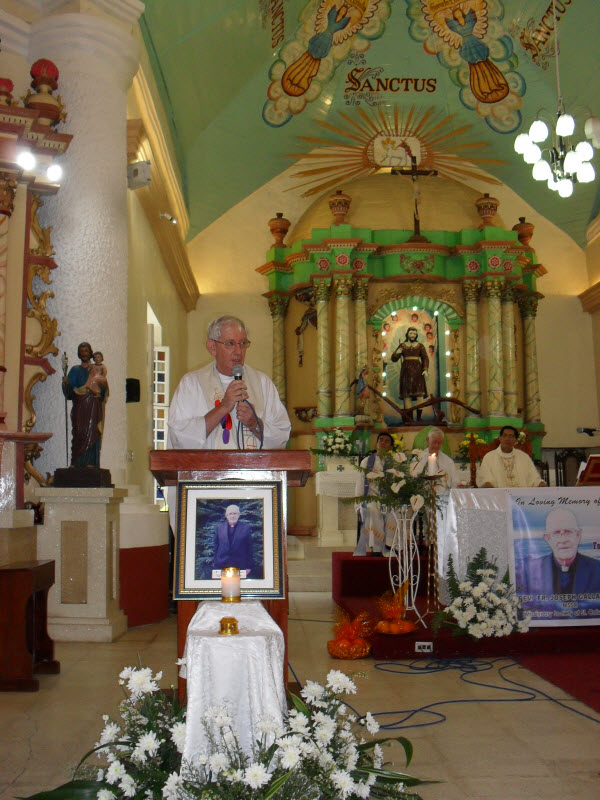 Fr Dan O'Malley was then invited to say a few words on behalf of the Columbans. After thanking the organizers for the invitation and commending them on a very moving celebration, he mentioned that it was appropriate to include Sr Armada Martin SSC in the celebration. She was the last Columban Sister to be involved in the school when it was handed over in 1995. She died unexpectedly on 21 July in San Juan City, only 12 days before Father Joe.

After the Mass lunch was served, provided by generous parishioners and various organizations. 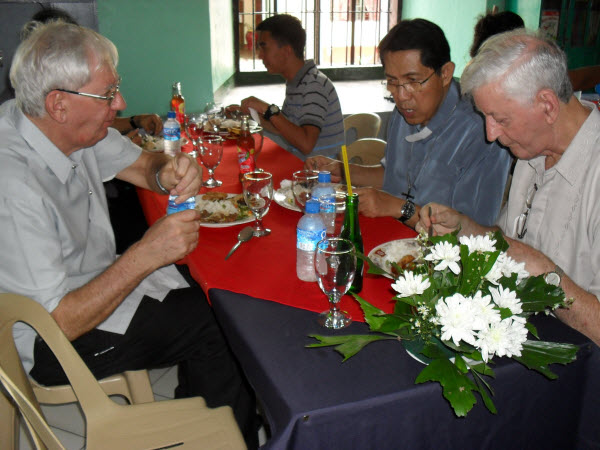 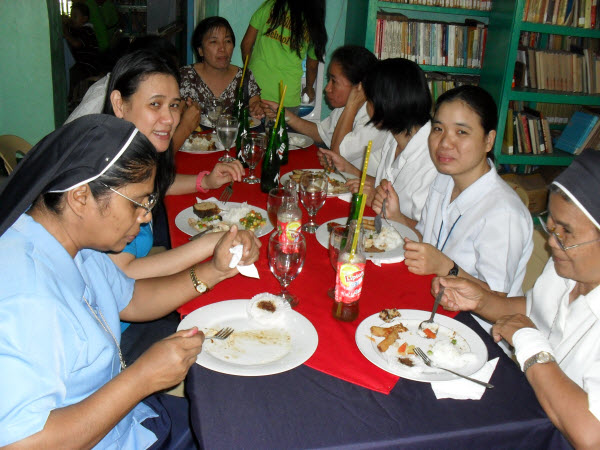 We Columbans came away with a great sense of pride in what Father Joe's presence had meant to the people of Labrador and also with a sense of challenge to try to imitate his kindness, his dedication and commitment to his ministry.

Author:
Fr Pat Baker
‹ Columbans ‘who have gone before us with the sign of faith’ - November 2012 – November 2013 up Memorial Mass For Fr Timothy Leonard ›