‘I wish I could be praying what they pray.’ Sr Teresita was a young student when she first uttered these words to herself. Their house was just across from Immaculate Conception College (ICC, now La Salle University), Ozamiz City, run by the Columban Sisters in the 1950s. She would always watch the Sisters pacing back and forth saying their prayers. She even wrote a poem about these Sisters praying. I asked her, ‘How did you know you wanted to become a nun?’ She answered, ‘Longing for a vocation is a longing for God. The Lord calls us in several ways. There was just something inside, a kind of longing for the Lord that continued to persist’.

Coming from a very religious family, Sr Teresita grew up involved in Church activities. She remembers always going with her mother in religious processions. She went to college and taught in ICC. Through the years, she couldn’t leave the thought of being like these Sisters. Something about them just fascinated her no end. ‘Why shouldn’t I?’ And so, at 25, Sr Teresita started ‘vocation shopping’.

When her mother heard that Teresita wanted to become a Columban Sister she felt lonely. But there was no resistance. Having lost her father when she was only 11, Sr Teresita and her seven siblings would always think of the welfare of their mother. Entering the convent would mean that only her sister Inday would be left to take care of her.

Sr Teresita spent two and a half years as a novice in the USA. And in her first year there she got news that both delighted and worried her. The novice mistress told her that Inday was also coming. ‘What will happen to our mother?’ was all she could blurt out.

Her mother cried when Inday asked for her permission. Sr Teresita learned later that her parents had prayed that one of them would become a Sister. One of them, not two. But her mother said to Inday, ‘I cannot say no to you because that would be saying no to God.’ In spite of her loneliness, Mrs Bernad entrusted her daughters to God. ‘Yet she would always be sitting on the balcony waiting for us to come home,’ Sr Teresita said with obvious nostalgia on her face.

She spent eight years as a professed Sister in Molave, Zamboanga del Sur, where she had an exciting life. Among other things, the Sisters ran Sacred Heart High School there. Her time there included the early 1980s when there were frequent rallies and transport strikes. She would be so eager to go ahead with her schedule that oftentimes she would stand by the road and raise her thumb, hoping to get a free ride. ‘I am not interested in getting rich. I am always interested in helping others. There are hardships everywhere but I always remind myself that I have more chances to help others. The more I share the more I am blessed.’ 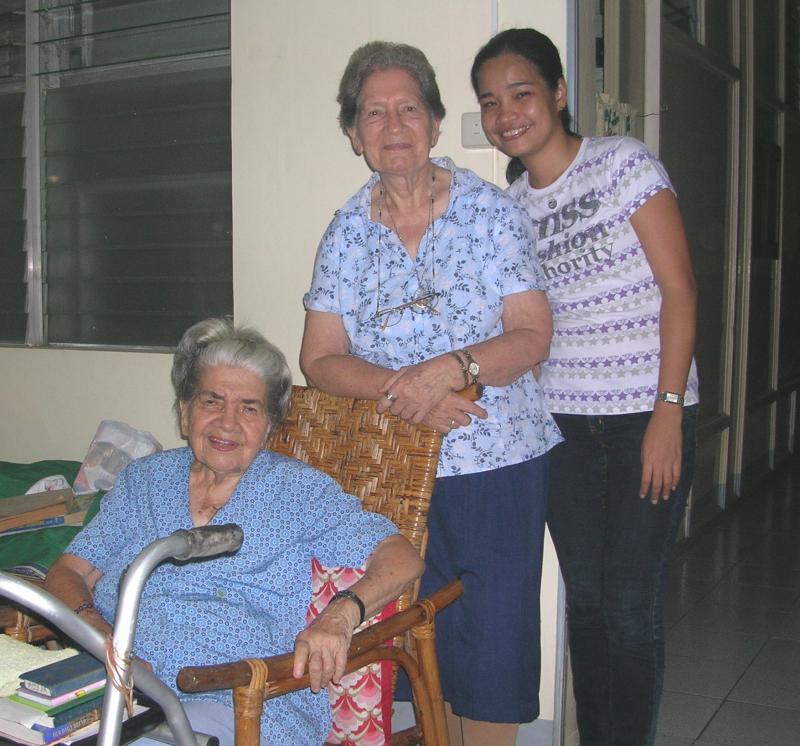 Sisters Inday and Teresita Bernad with the author.

In the late 1980s, when she was serving as the first Filipino Regional Superior in Manila Sr Teresita answered the phone one day. It was the Superior General looking for a volunteer to Chile. ‘Why don’t you take me?’ said Sr Teresita, volunteering herself.

She spent 11 years in the desert in northern Chile. ‘It’s amazing you don’t look for rain in a place where in 40 years of dryness it might rain for only one night’, she said, marveling at the missionary zeal that kept her going. ‘After one place is set up, you go to another where you’re needed. You don’t stay in one place. Because you are a missionary, you are always on the move.’

After dusk there is dawn. It is in this context that Sr Teresita shares her life as a Columban Missionary Sister. She is always looking for ways to reach out, to share herself, even in the twilight of her life. ‘The older you become, the more you realize that helping one another is the way life should be lived.’