The author is a Columban priest from Ireland who first came to the Philippines in 1966. Apart from a few years working in Britain he has been here since then. He is chaplain at Centro Escolar University, Manila.

To mark the Year of Faith and the New Evangelization, which ended on 24 November, the Solemnity of Christ the King, a very inspiring Philippine Conference on New Evangelization (PCNE), convened by Luis Antonio Cardinal Tagle, Archbishop of Manila, was held at the Pontifical University of Sto Tomas (UST), Manila, 16-18 October 2013.

Located in the Quadricentennial Pavilion, an ultra modern arena with seating accommdation for some 6000 people on three raised terraces, it was indeed an awe-inspiring spectacle enhanced by colorful cinematic, light and sound effects. The altar on a raised colorful platform served as the focal point for the vast crowd of participants. Masterly planned and organized by some 60 people under the able leadership of Henrietta T. de Villa, former ambassador of the Philippines to the Holy See, it can serve as a model of conference planning for people anywhere in the world.

In his homily at the opening Mass Cardinal Tagle welcomed delegates from Brunei, Taiwan, Jakarta, Hong Kong, Malaysia, Japan, India and the USA as well as from all over the Philippines. This was shortly after the devastating earthquake in Cebu and Bohol in which some 186 people lost their lives and 583 were injured. Many ancient and historic churches were also destroyed. Cardinal Tagle expressed his solidarity with the victims and their families. The collections at all the Masses of the conference, to which the religious, priests and bishops contributed, were to offer them some help and support.

The theme was ‘God Can Make All Things New’..

According to the Cardinal the whole point of the PCNE is a humble contribution to the construction and strengthening of the Church rooted in Jesus, His words in the Spirit in the midst of ruins. Quoting what God reputedly said to St Francis, ‘Build my Church, rebuild my Church’, Cardinal Tagle said that the people of Cebu and Bohol have promised to do this. They are the real living Church.

The journey of the Church in the Philippines and the role of Popular Devotions in the New Evangelisation was ably explained by Fr Catalino Arevalo, S.J.
Archbishop Emeritus Leonardo Z. Legaspi OP of Caceres explained the great devotion which the Bicolanos have to Our Lady of Peñafrancia. 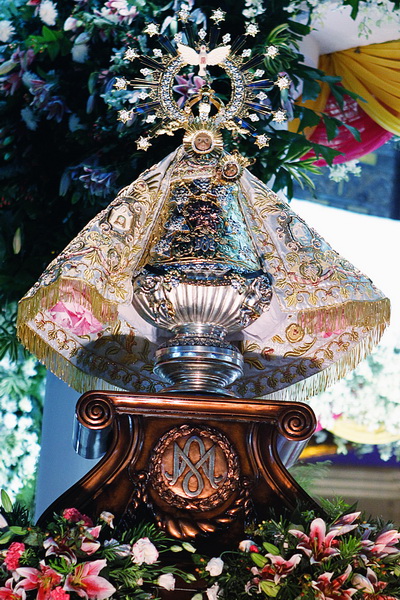 Our Lady of Peñafrancia

Celebration of Our Lady of Peñafrancia, Dublin, Ireland, 2012

Monsignor Clemente Ignacio, Parish Priest of the Shrine of the Black Nazarene in the Parish of St John the Baptist, Quiapo, Manila, which is very popular, as seen in the almost fanatical participation of some one million men who take part in the fiesta procession in January each year.

Pope Emeritus Benedict XVI once said that popular devotions are one of the greatest treasures of the Church. However they need to be deepened by being based on the Bible, good catechesis, liturgical practice and by linking faith to life -- good moral behavior and the practice of social justice especially, for the poor. Indeed the people’s love of fiestas, devotion to patron saints, novenas, processions etc. has helped them to hold on to their Catholic identity and culture in spite of aggressive proseletysing by many sects here, both local and foreign.

The Assisi experience was echoed in the testimonials of representatives from Muslims, Christians, Buddhist and Hindus. These represent most of the billions of the people of Asia. Unless the major religions work for and live peace, finding it will be very elusive.

In addition to the main events ‘Streams of Encounter with God’ took place in halls within the UST campus. They covered such topics as Word of God (The Bible), Prayer, The Youth, Justice and Peace Issues, the Integrity of Creation, Healing, Mary and Popular Devotions. I attended the one on Justice and Peace Issues. The speaker, Bishop Broderick Pabillo, Auxiliary Bishop of Manila, asked why the social teachings of the Church were largely unknown and not practiced. I believe it is because they are not taught as vehemently as they were here during Martial Law years some 30 years ago. But they are needed now as much as ever especially on account of all the graft and corruption scandals that are being exposed day by day.

‘Through this conference’, Pope Francis said in a video message, ‘I hope you will experience again the loving presence of Jesus . . . That you would love the Church more and that you would share the Gospel to all people with humility and joy. Don't get tired of bringing the mercy of the Father to the poor, the sick, the abandoned, the young people and families. Let Jesus be known in the world of politics, business, arts, science, technology, and the social media. Let the Holy Spirit renew the creation and bring forth justice and peace in the Philippines and in the great continent of Asia that is close to my heart’.

Providentially, the Mass was that of the Feast of St Luke, Apostle and Evangelist. In the gospel, Luke 10:1-9, Jesus sends forth the 72 disciples to proclaim the Good News reminding them that the harvest is big and the laborers few but to pray to the Lord of the harvest to send workers into his harvest. In his closing homily Cardinal Tagle thanked God for the success of the conference and for the 6,000 plus laborers present and committed to sharing the Good News of Jesus in the Philippines and across Asia.

The culmination of the conference was the service of light, Lumina Pandit, ‘To Spread the Light’.

The importance of Light since God first said "’Let there be light’ in the story of creation, the light in the desert guiding the Chosen People in their journey to the Promised Land to the birth of Jesus, Light of the World, was traced by a narrator. Each of the 6,000 present in the vast arena waived their lights to the strains of Trina Belamide's ‘Tell the World of His Love’, chosen in a competition as the theme song of World Youth Day, held in Manila in 1995 which was attended by soon-to-be saint John Paul II. A mammoth crowd took part in the closing Mass of WYDA 1995 in Luneta Park, Manila.

The Conference on the New Evangelisation was for many a life-changing event and one to be remembered forever by all present in UST and through the social media, radio and television.

Author:
Fr John Keenan
‹ Life as I Live it up Was God Alive in Estancia? ›