An Ordeal - then a Miracle 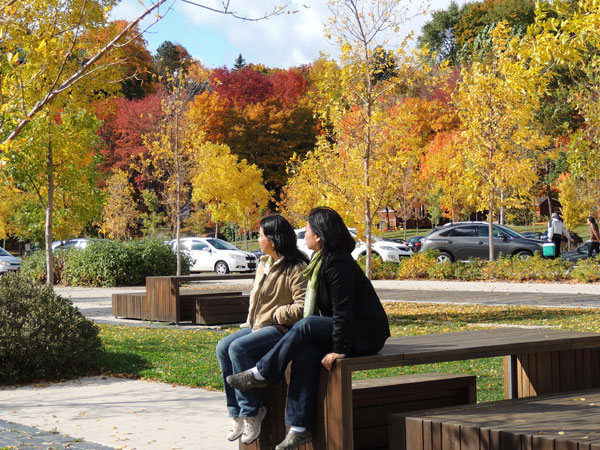 Marveling at the beauty of God's creation with my cousin Marley.

I was granted a single entry visa to Canada, all we needed to fulfill the plan to drive Montreal and Quebec City. This was a post-birthday present from my sister Gondee and her family, an unexpected yet highly appreciated opportunity to be with my cousin Marley Dacanay who used to be a Columban Lay Missionary in Taiwan. Marley is now a Lay Associate of the Foreign Missions Society, formerly Prêtres Missions des Étrangères (PME), and was preparing to leave for Brazil the Tuesday afternoon we arrived. We were amazed at how our visit came just in time to give her our family support. We felt nothing but wonder at the very favorable weather, the breathtaking scenery, as it was the peak of the autumn foliage. We also became the beneficiary of a free parking pass for a day to the most coveted parking area in Old Quebec City from a stranger. Our hotel accommodation was also beyond our expectation; everything was working out for us!


St André Bessette CSC, a lay brother of the Congregation of Holy Cross, was born on 9 August 1845 in Mont-Saint-Grégoire, Quebec, made his final vows on 2 February 1874, died on 6 January 1937, was beatified on 23 May 1982 and became Canada’s first male saint on 17 October 2010. It was largely his devotion to St Joseph that led to the building of the Basilica which Beth Sabado visited.

We were visiting St Joseph’s Oratory in Montreal prior to a lunch appointment with Marley and the Quebec Foreign Missionaries, as the group is also known, when we found that our car window was broken and my personal items (credit card, passport, IDs from Hong Kong and Taiwan, health card, driver’s license, cash, Columban Personnel Directory, smartphone, etc) were all missing. The initial shock was quickly overcome through the support of strangers around us and our collective sense of gratitude and awareness that things could have been worse. Thankfully, my laptop was in the trunk.

We filed an incident report with the church security but our request to review the surveillance video wasn’t granted. We called the police but they could not come to the scene and advised us to proceed to the nearest police station and file a report. Right there and then I notified MasterCard to cancel my account. This gave me some sort of control. As instructed by the police, we attempted to file for a consideration with the US and Canadian embassies but options were very few because it was Thanksgiving Day in Canada and Columbus Day in the USA, both holidays.

Marley's Superior General, Fr Guy Charbonneau, was so supportive and got in touch with the police and the rector of St Joseph’s Oratory. I felt so violated and naked, stripped of my identity, devastated beyond words. But an overwhelming sense of peace possessed me as my sister assured me that God saw all this. I must admit that I have at times judged her tendency to pontificate, but this time all I could hold on to was my faith. I had nothing to lose if I abided by her strong belief in the power of positive thinking!

A few hours later we went back to the place of the incident hoping for some encouraging development, but there was none. In the meantime, we contacted the US Embassy. The person on call was very patient but couldn’t offer any resolution. My situation as a foreigner holding a Philippine passport, with a B1B2 visa for the USA, working in Hong Kong and currently on a single entry visa to Canada, was so complicated. It would be impossible to re-enter the US. It would take significant time and resources to have my status reinstated.

I was advised to arrange for a flight from Canada to the Philippines and start the visa proceedings all over again. My sister acknowledged this suggestion of the US Embassy official and expressed confidently, ‘All we can count on now is Divine Intervention’. I was reminded of the migrant workers whom I journeyed with in Taiwan in undergoing the deportation process. I uttered a prayer, ‘God, do you want me to experience the same so I will be better equipped in assisting them?’ 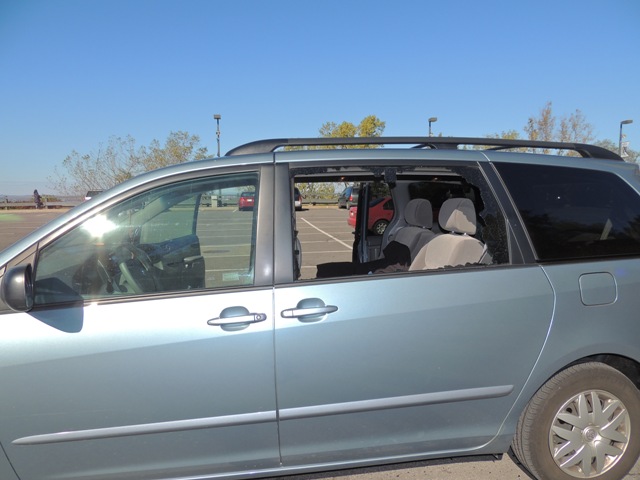 The car with the smashed window

I was very aware that I needed to secure my important papers and personal belongings. I blamed myself for being so irresponsible by leaving my important stuff in the car. But my sister reminded me to be gentle with myself. Her support and understanding and that of my family gave me permission to forgive myself, the only ‘treat’ I could give myself at that difficult time. Yes, I had my moment of stupidity. I hated it but there was nothing I could do. I had nothing to prove my existence except for a scanned passport and IDs sent in my personal email and saved in a folder a few years ago. I wasn't totally stupid after all, I thought, attempting to console myself. 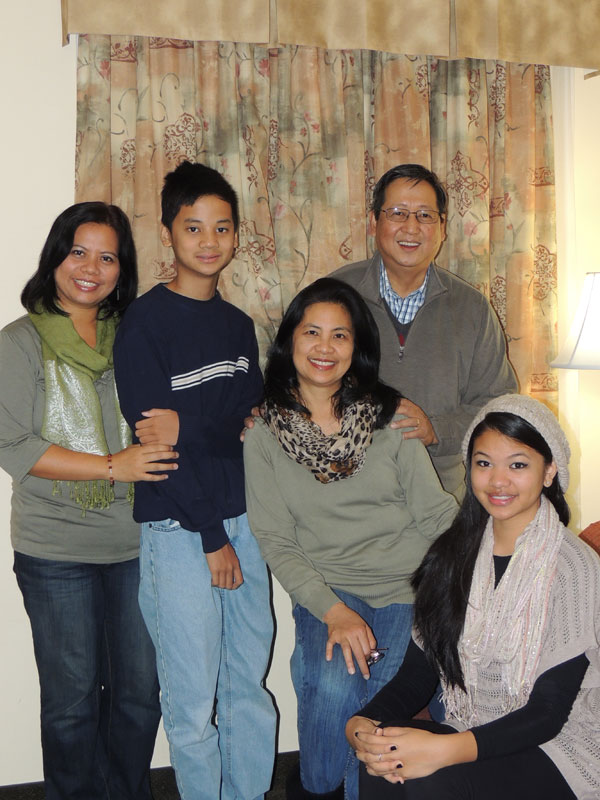 with my sister Gondee and family.

Marley's community graciously offered to accommodate us for the night. Meeting all the lovely people there, hearing their words of comfort, assurance of prayers and empathy added to my sense of peace and hope. As we settled in for the night, my sister's family experienced a taste of missionary life, the simplicity of our rooms, the dining hall routine and so on.

There was nothing I could do but pray, pray and pray. I cannot describe the peace and serenity but I believe it was a moment of grace for me and my family and brought us onto our knees together. I was deeply moved by the prayers uttered by my niece and nephew. They were asking God to touch the hearts of the people involved. They were praying for their conversion. I experienced some conversion as well.

Before retiring for the night, I managed to make contact with co-workers and changed all my internet passwords. As I checked my inbox one more time, there was a message from a stranger: Hi, I think I have found your phone in Westmount Park (Montreal) today Monday. The phone is still working perfectly. It seems you are an Asian . . . from the pictures, Filipina? Are you still in Canada? I would gladly give the phone back to you. I couldn't believe it! I was shaking and crying.

My sister said that this would start a series of fortunate events! Was this a gimmick, fraud or real? These thoughts came to mind . . . I ‘of little faith’! It was late when I read this man’s email. I tried reaching him on the number he provided but I presumed he was already asleep. I wasn’t sure if it was right but I left a message providing all our contact numbers in Canada. Then my niece said, ‘Let us google the park’. ‘And let us check this person on Facebook’, my sister added. And so we did. This gave us more hope and we managed to get some sleep.

I woke up early feeling rested and hopeful. I used the time to organize the address of the embassies to visit that day, including the Philippine Consulate in Ottawa, three hours from Montreal. My sister came into my room with a suggestion. ‘Let’s go to the park. Probably the robbers threw your other stuff away there.’ I was silent for few moments before agreeing.

While having a quick breakfast, my sister received a text message from the stranger who claimed to have found my phone and arranged a time for us to meet. My sister asked him how he had found my phone. He said that his son, whom he had taken to the park to play, had found it under a bridge over a dry creek in the park. I was suspicious. Yet I wanted to believe. ‘He’s a family man’, I thought . . .

You may call it a desperate move but I call it prompting and so we headed off to Westmount Park. As we arrived, a garbage truck passed by and I thought that the garbage collection had been done. My sister and I put on gloves and started to search every garbage bin in sight, opening each lid, lifting each bag from the bin, until we reached the place where ‘our lead’ said the phone had been found. As we went from bin to bin my sister kept reminding me that this was going to be a great article. ‘All for His glory’, she said!

I felt the throbbing of my heart. I felt that our ordeal would end. I saw a garbage bin outside a rest room on a hill in the park. I think it was our sixth or seventh. As we lifted the lid, I saw golden trimming covered with all sorts of rubbish. I recalled that my bag – a gift from one of the Columban supporters in Los Angeles - had golden trimming.

I realized that it was indeed my beige bag. My hands and whole body were shaking. I was crying joyfully. My sister was crying too but being a typical photo-lover wanting to document every move, managed to take a photo of me examining the contents of the bag. But I didn’t mind at all. ‘It's for your article’, she insisted!

Holding the unzipped bag more tightly, I saw my Columban Personnel Directory – we call it the ‘Green Book’ - appearing, my passport beside it. It was intact. My wallet containing my IDs and cash was gone but who cared. I got what I needed, my passport!

As I related my ordeal to a friend, he commented, ‘It is terrible that they treated your passport like rubbish. In Asia it could generate a huge amount of money for forgery’.

God is good and God is so faithful. In less than 24 hours, we had found what we had been searching for. We met ‘our lead, our angel’ afterwards in his office. As he handed me my phone, I felt so blessed to have been chosen to experience all of this. As we expressed our appreciation, he simply replied, ‘It is just natural to help’. God bless him!

We couldn't have arranged things better. We returned to St Joseph’s Oratory to offer our thanksgiving. We got back to Marley's place just in time to say our goodbyes and send her off. We stopped by and met my dear friend Sister Ditma Luz Trocio MIC who used to journey with me in Taiwan. Then we headed off to New Jersey, passing through the US- Canada border without any problem. I was able to fulfill the rest of the activities as planned such us visiting elderly relatives and spending more time with the family.

Someone said, ‘Miracles are everywhere. You just have to find the time to appreciate them’. Words are not enough to describe this experience. We asked . . . we knocked . . . we received . . .

The author, a nurse by profession and from Pagadian City, Philippines, is the Coordinator of the Columban Lay Missionary Central Leadership Team and is based in Hong Kong. She has served in Taiwan as a Columban Lay Missionary. She may be contacted on Facebook [Lilibeth Sabado (林德蓮)] and by email at madamsaturday.ms@gmail.com