We just celebrated the feasts of All Saints Day and All Souls Day on November 1 & 2 respectively. I visited the grave of my father and stayed there for a few minutes with my mother and my brothers. While we were talking, I noticed that we often referred to what my father said or his stand on a particular issue or what he shared with us or did for/to us. He’s been dead for one year and six months, but he’s still very much a part of our lives… and will always be. He’s alive in our hearts and minds . . . 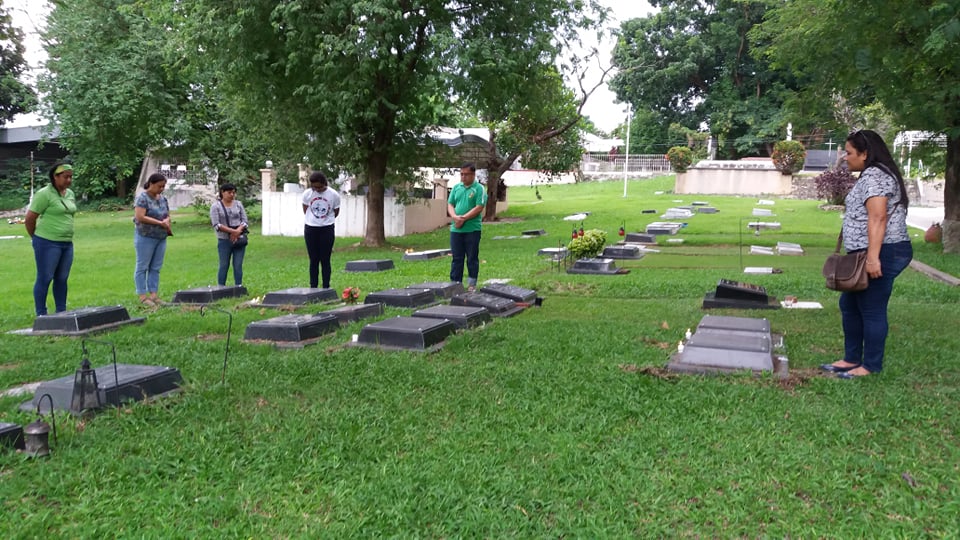 Lili is a Columban lay missionary from Tonga who arrived in the Philippines in December 2015.

I am currently assigned in Cagayan de Oro, to one of the communities named Antipolo, in a sub-parish called Barra. My engagement in the ministry involves accompanying and visiting families, and teaching catechism to the children among others. I am also involved in the Women’s Ministry of the Archdiocese . . .

A Shepherd with the Smell of his Sheep

The author, known to many as “Father Dodong”, is a Columban priest from Payao, Zamboanga Sibugay. He had worked in China for quite a number of years. At present, he is part of the formation staff at the Columban House of Studies in Cubao, Quezon City.

In the film Monseñor: The Last Journey of Oscar Romero, the Archbishop is seen in the cafeteria of the Archdiocesan Pastoral Center of San Salvador having coffee with the people. This was at the height of the military repression in El Salvador and people flocked to him to tell their stories about missing loved ones and those who were killed. One of the women said, “I only had pieces of him to bury, and I cried out, ‘Why did they burn him? Why did they kill him? My son was not an assassin.’” Monseñor Romero listened to their stories and afterwards he instructed the lawyers to document the circumstances of the killings and by doing so, he gave voice to the victims.

In this essay I would like to focus on Romero’s personal witness and his role as shepherd of the church who accompanied his people selflessly and offered his life for them . . .

Gloria was married to Leonardo Fallorina of Candelaria, Zambales. They have four children, all girls. She has been back from Japan to the Philippines since 2000. In her golden years, she is still actively engaged in church works in Valenzuela City.

I arrived in Japan on December 5, 1995. Adjustment in a foreign land was not easy. Language was one of the biggest problems. There was only one Person who could understand me completely, GOD.

Being a church worker for more than ten years, I missed attending Holy Mass in less than a week since I arrived in Japan. I tried my best to find a church where I could feel at home being away from home. I remembered what God said, "If you seek Me, surely you will find Me". True enough, with the help of the taxi driver and a few Japanese words that I managed to memorize, courtesy of some Filipinos living in that area, I was able to locate Chibadera Catholic Church. So beautiful, magnificently standing on top of the hill ! . .

Seasons of My Heart

Columban Father Don, from USA, was ordained in 1972 and was assigned in Mindanao ever since. At present, he resides in Singalong.

Thanksgiving 2018 is upon us. Some with turkey and cranberry sauce on their minds are looking forward to eating far too much when they already weigh far too much. The change in the liturgical colors, from green and white to violet dramatizes our entering into a new season in the Church calendar.

Advent Wreathes, in the Churches and in many homes, act as calendars marking the beginnings of each week in this season of preparation for the celebration of the Birth of Our Savior . . .

When Two Different Roads Tread on One Mission

The author is a Columban lay missionary from Balintawak, Quezon City who is assigned to England since 2010. Ger is an architect by profession.

Christmas celebration starts early in the Philippines. As the “ber” months are already here, you start to see Christmas decorations in shopping malls and hear Christmas songs playing at the background. Now that I am still here in the Philippines, this brings back one significant memory from the Christmas season last year . . .

The Gift of Misyon

The author started as editorial assistant in 2008 and got promoted to assistant editor with the transfer of Misyon office in Singalong in June 2017.

When I joined Misyon in November 2008 I only thought of a part time job. But the editorial assistant position was such a demanding, full-time job. I accepted the offer but honest enough to tell those in the office that I might not stay for long as I would rather practice my teaching profession. The editor at that time was Columban Fr. Seán Coyle, who told me, “At the end of six-month probationary period, I will have to decide for you to continue or not. I am giving you the same freedom to decide for yourself.” What he said captured me as I found in it the sense of freedom, consideration and responsibility combined. My career path had changed since then . . .

A Step at Ground Zero

Jay-R, from Barra, Cagayan de Oro, is the assistant vocation animator for Mindanao.

Filthy things were everywhere. Remnants of missiles scattered. Bullets were all over the place. I got teary-eyed at the heartbreaking scenario at Marawi Ground Zero . . .

I understand that the veneration of the relic of a Saint allows us to pay respect as we commemorate the life of the Saint and request for his/her intercession for our petitions.

But I find it creepy to think of a body of a Saint being divided to be distributed into different monasteries for relic purposes. Why do they have to do that? Can’t we just leave the body as intact as possible and respect it the best way we could?

Veneration of the relic of the right hand of the Holy Hieromartyr Polycarp, Bishop of Smyrna, Nafpaktos, West Greece, May 2, 2009

From the moment I was first illuminated by the light of reason, my inclination toward letters has been so vehement that not even the admonitions of others… nor my own meditations… have been sufficient to cause me to forswear this natural impulse that God placed in me.

A Shepherd with the Smell of his Sheep ›