The author is a Columban seminarian from Myitkina, Myanmar who joined the Columban formation program here in the Philippines in 2015. At present he is studying Philosophy at the University of Santo Tomas. 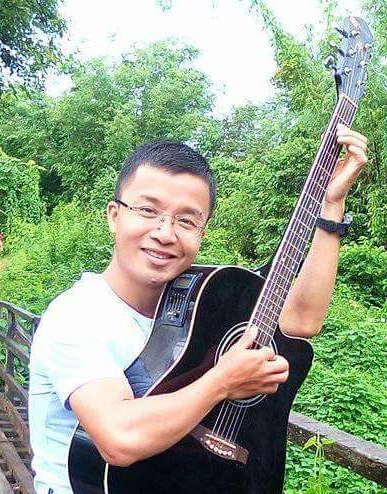 I am Columban Hkun Myat Aung. I am from Myanmar. I came to the Philippines on 1st of November 2015 to join the formation program of the Missionary Society of St. Columban. When I arrived in the Philippines, I was not able to speak English very well. Most of the time, I was silent during our community meals because I could not understand what my companions were talking about. I could not catch even a word they said. Learning a new language is not easy for me. I went to language school in the morning after breakfast then came back to the formation house in the afternoon at around 4 p.m. Studying English the whole day drained my energy the moment I arrived at the house.

Fr Pat Colgan, from Northern Ireland, was based in Fiji before being elected to the General Council of the Missionary Society of St Columban. The Council members live in Hong Kong.

As part of the first visit to Myanmar (Burma) by two newly-ordained Korean Columban priests in November 2014, Frs Carlo Jung and Jehoon Lee, who will be assigned there this year, the Bishop Francis Daw Tang of Myitkyina was anxious to take us, accompanied by some Columban Sisters and a lay associate from Hong Kong, to one of the sites of the original Columban mission among the Kachin people. We drove about 45 kms north to Tanghpre, a scenic spot where the Mali and Nmai rivers form the ‘Confluence’; of the famous Irrawaddy River.

Frs Carlo and Jehoon at the confluence of the Irrawaddy

The author was elected to the General Council of the Columbans in 2012. This photo was taken just after their election. L to R: Fr Arturo Aguilar, Vicar General (USA, ordained 1984, Regional Director in the USA when elected and served before in Chile), Fr Patrick Colgan (Ireland, ordained in 1994, serving in Fiji when elected), Fr Kevin O'Neill, Superior General (Australia, ordained in 1992, served in China when elected), and Fr Darwin Bayaca (Gingoog City, Misamis Occidental, Philippines, ordained 2005, Vice Director and Rector of Formation in the Philippines when elected, served in China before).

During the second half of a hot June, Fr Pat Colgan and Fr Darwin Bayaca, both members of the General Council of the Missionary Society of St Columban in Hong Kong, visited Myanmar; the Society is reengaging with Myanmar, formerly known as Burma, in multiple ways at this time:

a. The Society accepted three young men as seminarian candidates, to join our Program in Manila later this year. They are currently living in a simple bamboo 'Columban Accompaniment' house in Mandalay, following a program of prayer, studies and pastoral outreach with Fr Neil Magill.

The author is a Columban Sister from Ireland. She has been in the Diocese of Myitkyina, Kachin State, Myanmar (Burma) since 2002. She has developed a home care health program for people with HIV/AIDS and established a respite house, Home of Hope, to enable people from distant places to avail of medical care. Here she reflects on her experience of burials in Myanmar.

I was shocked when I read about the costs of funerals in Ireland. An exorbitant sum was quoted, several thousand euro (€1.00 = PHP58.00), even for a simple, ‘no frills’ burial. Many people it seems spend a long time paying off the debt. Others talked of the cost of a grave, the advantages of cremation, the necessity of a wake or a meal after the burial, and so on. It was all very sobering. 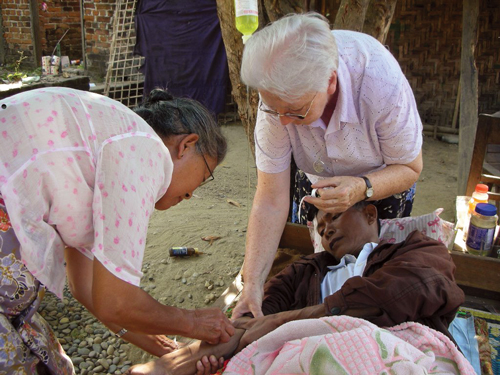 What a contrast to my experience of burials in Myitkyina, Myanmar! For the past nine years here in Myanmar I have been working with the very poor.

In the last year we buried approximately 48 patients from the 30-bed Home of Hope where I am. Most of these, men and women, died of AIDS. The majority had no one to mourn them, no family to grieve at their going.

From 1936 until 1979 Columban missionaries ministered in the Diocese of Myitkyina, Myanmar. During those years they worked hard to develop and strengthen the local Myanmar church but they were forced to leave in 1979.

Since leaving the country, the Columbans have tried to continue to support the Diocese. The Columbans always placed great emphasis on education and during one period, they opened 47 primary schools, six middle schools and four high schools.

In June the new academic year will start here in the Philippines. The Department of Education will also begin to implement the new ‘K to 12’ curriculum, will extend basic primary-secondary program by two years. In the Philippines education is seen as a vital key to improving one’s lot and that of one’s family in life. Parents will make great sacrifices, even to the extent of working for years overseas away from their families, so that their children will get a good education.

The author is from Jimenez, Misamis Oriental, Archdiocese of Ozamiz. The town is named after a Recoleto friar and is one of the oldest parishes in Mindanao. For many years it was staffed by Columban priests. Sister Wennie, as she is known, has been in Myanmar (Burma) since 2003.

Have faith! With God nothing is impossible . . . These are the words that I hang on to when I start to dream and hope for something that is way beyond me. 8 May 2009 was a day of joy, a day of wonder, a day of celebration of a dream come true. On that day many youth from the different parishes came to celebrate the official opening of our new Diocesan Youth Centre in Myitkyina Diocese, Kachin State, Myanmar. Priests, Sisters and neighbors also joined us. Bishop Francis Daw Tang of Myitkyina blessed the Centre and we celebrated the Eucharist. Afterwards we were entertained by the youth who sang their own musical compositions before partaking in the traditional meal that followed.

We call our building the Centre for Learning Alternatives for Youth (CLAY). The purpose of this Centre is the advancement of the youth. We want to help and support them in their human development so that they will realize their gifts, deepen their self-worth and, in time, reach their full potential. We have taken the first steps to make this dream a reality.

Looking back, I asked myself how this dream started. When I was a novice in the Philippines, I visited a campus where I met young students who were warmly welcomed, accommodated and facilitated in their educational, emotional and spiritual needs. I was very impressed by the effective program. I kept that experience in my heart as I continued my missionary journey.

Arlenne, from Talisay City, Cebu, has worked as a Columban lay missionary in Korea after which she served a term as coordinator of our lay missionaries in the Philippines. She is now in Myanmar (Burma), a country with which the Columbans have had ties since 1936.

‘Arlenne’, with a prolonged hold on the second syllable, was the way people at home called me when I was a child in order for me to do something. And then it was followed by ‘Marika’ (Come here) if it was my mother who called or ‘Dali diri’ (Come here) if somebody else. I would answer immediately saying, ‘O,’ which meant ‘Yes’, and then went to the person who called me.

Being an obedient child, I always followed what I was asked to do, sometimes willingly, and other times not so willingly.

This was one of my earliest memories of being called as I am, by my name.

Columban Sister Tammy, a regular contributor, is from Molave, Zamboanga del Sur. She was on mission in Hong Kong before going to Myanmar.

More than five years ago, when I had just arrived at Myitkyina from a vacation in the Philippines, Sister Matthew FMM, a nurse, came with a sad face telling me that her patient was unconscious and that he could die soon. She then told me about him.

Columban Sister Tammy, from Molave, Zamboanga del Sur, shares another story from Myitkyina in the north of Myanmar.

In other countries, Christmas decorations are usually up long before Advent begins, especially in commercial centers. But for us here in Myitkyina, Myanmar, where 89 percent of the people are Buddhists, there are no Christmas decorations around except in churches, convents and priests’ houses. Christmas 2004 was the first time we, the Columban Sisters, celebrated Christmas as a community in Myitkyina. It happened that Sr Kathleen Geaney, our then Congregational Leader, was with us for Christmas.